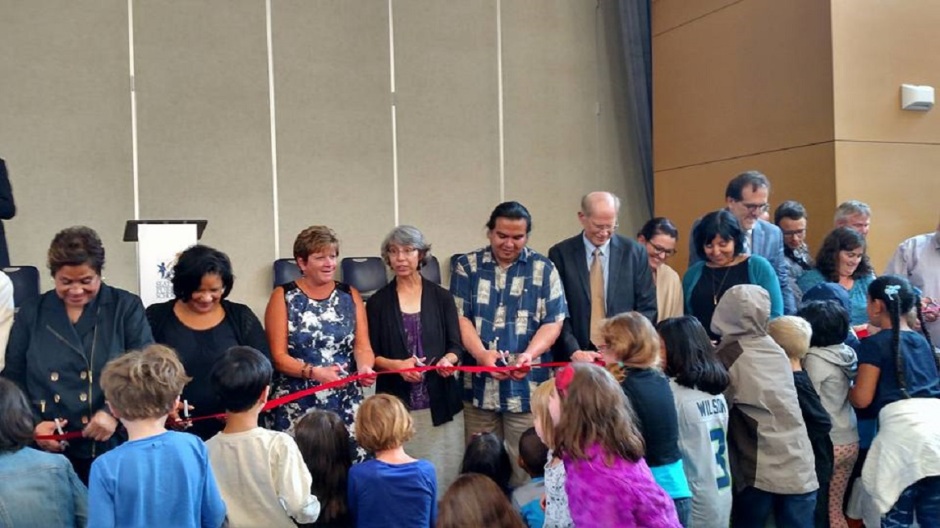 State Senator Maralyn Chase (32nd Dist.) addressed the audience, and spoke of her friendship with the school’s namesake. She shared how proud Hazel herself would have been of the school and its mission. Host-led building tours immediately followed the ceremony, and families visited classrooms where teachers and staff were busily setting up new learning spaces.

The new home of Hazel Wolf K-8 came to be as a result of dedicated community, parent and staff efforts, and Seattle voters who supported the recent BEX (Building Excellence) levy. Former Seattle School Board President Sharon Peaslee gave high praise for the cutting-edge and environmentally sound building design, with a hope that it would be very close to attaining a net-zero level of energy use. The official rating will be determined when the solar array is installed on the roof.

K-5 classroom assignments were posted near the main office, and Principal Nelsen shared that class schedules for grades 6-8 would be distributed to students on Wednesday, September 7 (the first day of classes for grades 1 through 8). Kindergarten classes start on Monday, September 12.

The grass was seeded just hours before the ceremony, and attendees were asked to take special care near the edge of sidewalks as the germination process begins. The play structure will be located on the south corner of the site, and will be installed after it arrives later this month.

The community celebration continued into the late afternoon and evening with delicious cupcakes provided by the PTSA, live music performed outside by students and parents, and other tasty items sold by local food trucks. It was a day of full tummies and full hearts.